I’ve wanted to visit Maine since I was five years old in 1977. That was the year the Disney live action/animated combination film Pete’s Dragon came out. My family was still living in San Angelo, Texas, as my pop was stationed at Goodfellow Air Force Base.

Pete’s Dragon introduced me to lighthouses, fishing boats, magic, New England, and a fictional maritime town named Passamaquoddy. The town’s name was taken by the film makers from the real-life Passamaquoddy Bay, an inlet of the Bay of Fundy between Maine and New Brunswick.

Later on my mother read to me a story book called The Little Red Lighthouse and the Great Gray Bridge, a book about the little Jeffrey’s Hook Lighthouse discovering it was still important even as it was overshadowed by the construction of the giant George Washington Bridge connecting Manhattan to New Jersey. Granted Jeffrey’s Hook is in New York, not Maine, but to a little boy’s mind it was another New England lighthouse, and that meant, of course, Maine.

As a child I developed a love for Red Lobster restaurants more for the décor and Maine-themed feelings they evoked than for the food (though I do love the food!). I was always interested in boats and ships; I’ve talked about how visiting Pearl Harbor when I was eight fixated me on being in the Navy). But I can trace my absolute fascination to working boats and all things nautical to a Disney movie about a magical disappearing dragon back in 1977.

I planned to go to Maine for Spring Break in 1995…but I discovered I had more college credits than I thought and graduated before that road trip ever happened.

After nearly 30 years of looking north, I finally rolled across the state line into Maine the evening of July 23. I got settled in Portland, then drove out to Fort William Park in Cape Elizabeth to see the famous Portland Head Lighthouse. Lit in 1791, it is the oldest of Maine’s lighthouses.

The evening did not disappoint. If I could have scripted that night for a TV show, I would have written mild temperatures, low, scudding, broken clouds and just enough mist to create a visible beam of light from the tower over the tempestuous New England sea…and that is exactly what I got that night! My first night in the state was a living picture-postcard of the most quintessential experience of coastal Maine one could ask for.

Portland was quite a hidden treasure. Instead of one day I spent a full three days in that city alone. I’ve eaten more seafood in the last four days than in the last four months. Between Portland’s waterfront, riding the Casco Bay Lines mailboat on its run from Portland around the islands of Casco Bay, and the Maine Maritime Museum in the town of Bath, I’ve learned a lot about the Pine Tree State.

Maine was originally part of Massachusetts, but seceded to become the 23rd state in 1820. It was admitted as a free state to balance the statehood of slave-holding Missouri as part of the famous (infamous?) Missouri Compromise.

During the 19th century Maine was the single largest shipbuilding state in the Union, and one of the busiest maritime economies in the Western Hemisphere. The seemingly limitless lumber across the state fueled the shipyards as well as making Maine the largest lumber producing state of the early republic. Casco Bay, on which Portland sits, is the second deepest natural anchorage in the U.S. after Norfolk, Virginia. As a result, Casco Bay and Portland were inundated with a naval tsunami during World War II as the U.S. joined in the Battle of the Atlantic.

Today Maine exports a wide variety of items, including poultry, eggs, dairy products, cattle, wild blueberries, apples, and maple syrup. Bath Iron Works in Bath, Maine, is one of the Navy’s key shipbuilding facilities, producing many destroyer hulls and other medium-sized warships. Fishing and lobstering are still economical mainstays, of course, but don’t dominate the overall economic output like they once did.

Maine produced one of the great American heroes of the Civil War: Maj. Gen. Joshua Lawrence Chamberlain. A quiet college English teacher, he left the classroom and led the 20th Maine regiment to fame holding the Union left flank during the blistering heat of battle at Gettysburg in 1863. Later severely wounded, he survived and was directed by none other that Lt. Gen. Ulysses S. Grant to receive the surrender of Robert E. Lee’s Army of Northern Virginia at Appomattox Court House in 1865. When he finally died in 1914 in Portland, he succumbed to the lingering effects of his wartime wounds. In death Chamberlain achieved on last bit of (slightly odd) Civil War fame: he is the last known Civil War veteran to die of complications from wounds sustained during combat, and is therefore considered to be the last casualty of the Civil War.

Of course Maine is not all coastline. I will be seeing the interior of the state in a day or two as I head through towards New Hampshire and Vermont. I will, of course, be on the lookout for moose. In Florida we have to keep an eye out for deer, bear, or even alligators crossing the road. But up here you have to watch for moose. Hopefully I’ll see one or two in the wild as I travel cross-country to New Hampshire.

In fact, Maine has inspired me even more than any other state to seek out small local diners and eateries. I never turn up my nose at local places, but often after hiking and exploring I’m in a state of hunger and exhaustion that leads me to the first place I can find…and those are often chain restaurants. Nothing wrong in that, but Maine has been such a fun, exciting place that I’ve made it a point to explore local restaurants, even if that means driving longer than I’d care to in order to find food.

So far, Maine and her people have become my second-favorite continental state after Florida. It is a rare, rare event for one to travel to a place dreamed of in childhood and find it actually lives up to the expectations one had, but Maine has done so. 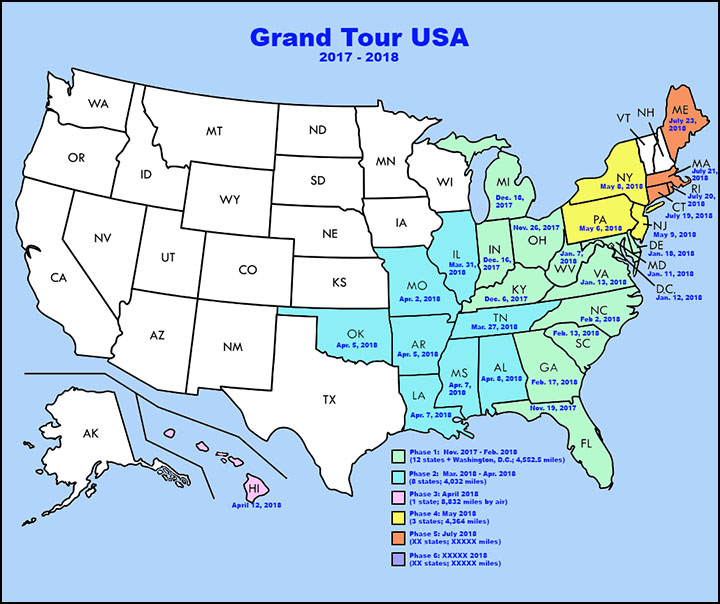