Check out the map at bottom; I’m in Iowa. I am officially out West. The eastern half of the continent was tricky enough, but the distances involved tended to be shorter. A four-hour drive usually landed me in another state…or across two states even.

Not any more. I’ve two stops in Iowa, then am shooting over to western Nebraska…the up to South Dakota…North Dakota…back east a bit to Minnesota…

Thing is, the distances these western states contain mean I’m now facing five, even ten hour drives between targets. I have to get very strategic in order to see one or two good sights in each state while not killing myself driving. And, considering I’ve suddenly added Canada to my journey (being the ever-obsessively compulsive tourist I am) I just added a lot more territory to my adventure.

My main target in Nebraska is the famous Chimney Rock on the state’s western edge. Then up to South Dakota’s southwestern quadrant for Mount Rushmore. Then to North Dakota. Then back over to Minnesota. Yes, that’s a jaunt back east a bit, but it gives me a great excuse to hook north and see a bit of Manitoba, Saskatchewan, and Alberta before dropping back into Montana. Then Idaho and maybe back north to Alaska before ending up in Washington State for September. I’m going to take a month’s down-time by renting my best friend’s guest cottage behind his house in Port Ludlow for the month.

The point to this particular column is that I’m already developing a very healthy, very visceral appreciation for the untiring courage shown by the Native Americans and the pioneers of the U.S. and Canada. It’s one thing to look at a map and go, “Wow! That’s a long way!” It’s another thing to watch History Channel and see programs on the great migrations of the Native Americans, or the horrors the Donner Party endured. These things bring knowledge, yes.

But knowledge can be rather sterile without experience.

To actually understand the size and scope of this continent we call North America, you need to get out and cross this land on land. Flying is not the way to develop an appreciation for the size of the world the U.S. and Canada inhabit. Nope. No way, uh-uh. Nada. Get out and get the experience that transforms mere knowledge into real life, into understanding. This is the reason we travel; we’re curious, we’re want to know, we want to understand So get out and start understanding.

Get in your car and drive. Get out here west and suddenly realize how long the hours can feel when the land is flat. When the only thing to see are acres and acres and of crops and the occasional barn.

It’ll take me about ten hours to travel from the middle of Iowa tomorrow to the western edge of Nebraska. Now, I’ll probably break that in two; drive for six or seven and stop for the night (eight hours is my personal limit, and that’s pushing it). Ten hours in a car will be a long time and feel like a long time, even for an indefatigable explorer like me. But…that’s only ten hours. Get on a horse, or just use you feet, and that same trip will take you ten weeks, or maybe ten months.

This is why I’m doing this. I want to see this continent we all call home. I want to experience the flavor and culture and sheer size of each state and, by extension, our nation (or nations, if you add in Canada).

But it’s bedtime here in Iowa. Now things get serious. Time to be very strategic and be ready for some very long drives. But, I firmly believe the rewards will be worth it. 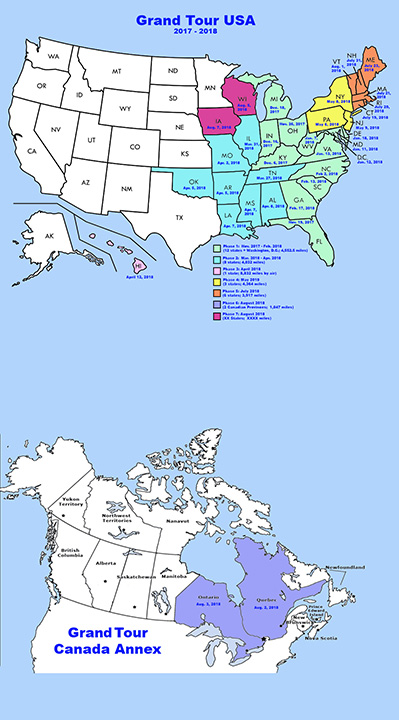