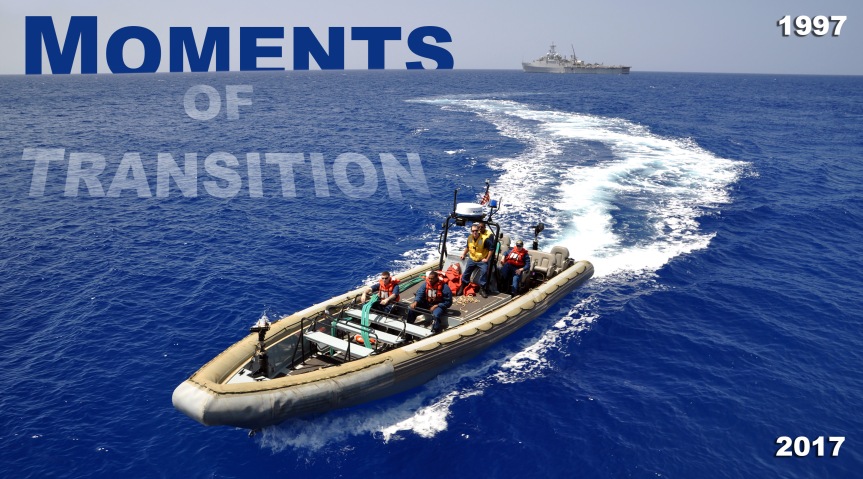 Madness. Sheer, inescapable, asphalt-founded madness. Yet, what a story today’s tangled tale along a troubled trail of precipitation-painted pavement is!

Tomorrow (Aug. 8, 2017) I have my first in-person interview for a job I would very much like to get—teaching public affairs at the Defense Information School (DINFOS), also on Fort Meade. However, as this is an in-person interview, I sort of have to show up. In person.

I have…er, had…and old “Garmin” GPS device I used to use for long-haul trips. Used to use as of about six hours ago. For the record, Garmin still manufactures excellent products, but digital products do have a life span in our modern age. Mine was at least seven years old. Somewhere in the near past it apparently stopped downloading current maps and failed to keep itself updated.

I used to teach at DINFOS as a First Class Petty Officer from 2007 – 2010. In 2010 I moved to the Hampton Roads area for sea duty aboard USS Ponce (LPD 15) and have been there ever since after transferring to the Navy Public Affairs Support Element East for more sea duty and then shore duty. I haven’t set foot inside Washington, D.C. in seven years…which is about 1/5 my entire life span so far (waiting for connecting flights at Ronald Reagan Washington National Airport does not count!). I know enough to know I don’t know my way around here anymore without help; hence the GPS.

However, before I realized it, my Garmin had taken me into the heart of Washington instead of around the beltway. Now, before any of my loyal readers berate me for missing the big “I-495 Washington Beltway” signs, there were none. But I did pass through a rather large construction zone that, looking back, I’m convinced was the temporarily de-signed I-495 interchange.

By the time I realized where I was I was stuck on I-395 heading into the heart of the city. I had the device do a quick recalculation while I was at a stop light…and it promptly got me completely lost. The GPS device did not recognize half of the roads in the capital city of the world’s only superpower (I kid you not!).

This is odd because my pop has an even older Garmin that still works quite well. I really do wonder if there was a software glitch in mine because, before I left Norfolk, I set it to take me on the I-495 route, but the device missed I-495 and then couldn’t even find its way around Washington, D.C.

I had to switch to my phone on the fly to get out of there.

The problem now was time. I left the Tidewater early enough (11:00 a.m.) to avoid D.C. rush hour…if I had been steered onto the beltway and not into the city. By the time my phone got me back heading out of the city and northeast towards my hotel in Jessup, Md., it was rush hour…on a rainy day…in the Washington Metro Area (ok, class, can we all say “horrific roadway nightmare”?).

Yikes! Makes me want to reenlist and stay on a nice, safe, tiny little aircraft carrier that’s only 1,000 feet long…

Still, I finally made it, and I was able to catch up with my buddy Webb in Savage Mill tonight. First time in seven years we’ve been face to face over dinner. He and I are old hiking and photographic friends, and he loves my corny puns, so I made sure I loaded my conversation with loads of them. (Ok, ok, he has a minor stroke whenever I pun, but, darn it, the expressions on his face are just too good to miss!).

My interview at the Defense Information School is tomorrow at 9:30. Then it’s back to the Tidewater. Time and events are moving fast. On Wednesday morning at 9:00 I have an interview with the public affairs department of Marine Forces Command on NSA Hampton Roads. Two interviews in one week. Not bad, I’d say.

I keep coming back to an analogy from the TV show “Doctor Who.” Whenever a Time Lord like the Doctor dies, they regenerate into a new body (conveniently allowing the BBC to keep the show going for over 50 years by re-casting the role of the Doctor). Each new actor plays the same basic heroic and troubled Doctor, but interprets the character differently with a different persona. The audience always spends the first few episodes of a new Doctor’s run getting to know the unknown—learning who the new Doctor is.

In that way I’m sort of in a “regeneration cycle” now as “The Chief” prepares to pass into history and the next iteration of Nathanael Miller prepares to step forward. I am more myself now than at any point in my past, but I don’t yet quite know the “shape” of the “who” I’ll be once the uniform is off. It’s sort of like wandering in a big city with a GPS that has to be replaced on the fly. You know where you’re going, but in that singular moment you don’t know how you’ll get there; you only know that you will get there.

Wow! Even I’m rather impressed with how elegantly I merged a story about a broken GPS unit with a reference to the TV show “Doctor Who” in order to make a uniquely sublime point about military life.

As I said, I’m more myself now than at any time in my past: I’m a story teller. And, you know the thing about stories? Stories are valuable. Stories are eternal. Stories must be told. If stories aren’t told, they just become footnotes to a life, and it would be madness to waste such treasure!

Stories are, after all else is done, how we live on in memory!